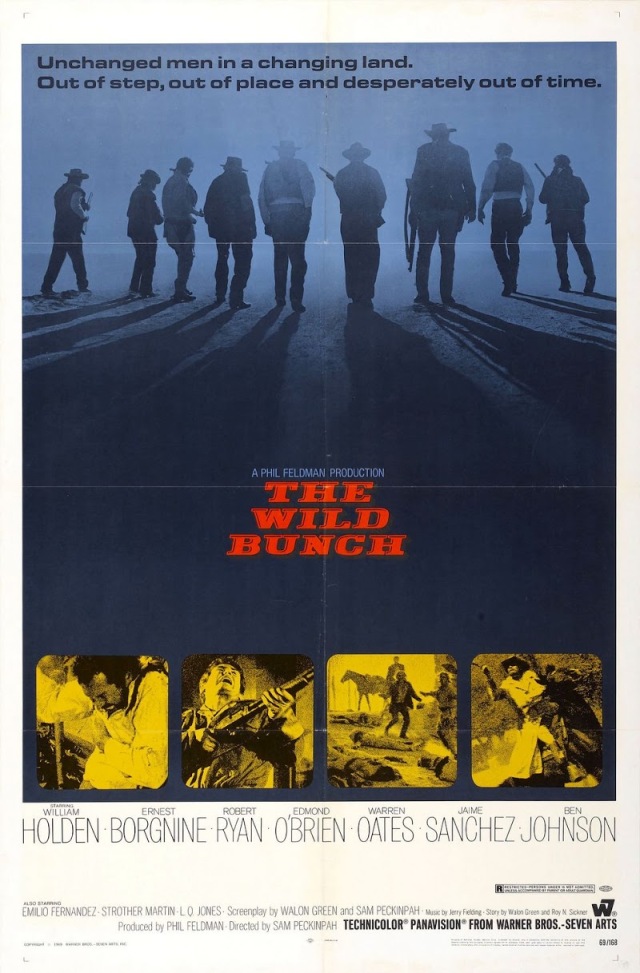 When I first considered watching this movie, I had a great deal of trepidation about whether it would suit my taste. Mainly due to three major factors:

One: it was a Sam Peckinpah movie, and the man is known for his extraordinarily violent films;

Two: Peckinpah could most fairly be described as a man’s man. As such, the thought of watching an ultra-violent male-bonding epic Western seemed a bit less than enticing;

Three: If male bonding was elevated to lofty heights in the film, I figured women probably ended up with the short stick, personality-wise.

Now, in my entry to the “In Like a Lion, Out Like a Lamb Blogathon,” I’ll tell you why I ended up loving this movie.

It’s 1913 in Texas, and Pike Bishop (played by the awesome William Holden) wants to retire from his role as leader of a gang of aging outlaws. However, he wants to make just one last score (a railroad office robbery) before he walks off into the sunset.

Among his gang are Dutch Engstrom (played with grinning perfection by Ernest Borgnine) and brothers Lyle (Warren Oates) and Tector Gorch (Ben Johnson), the latter two of whom seem to be assigned to the role of comic relief.

Pike’s plan to rob the railroad office doesn’t quite come off as expected. Pike’s former partner, Deke Thornton (played by Robert Ryan, his features so craggy, his eyes look like holes gouged in his face) has rustled up a posse of bounty hunters (mostly idiots), who ambush Pike’s gang. 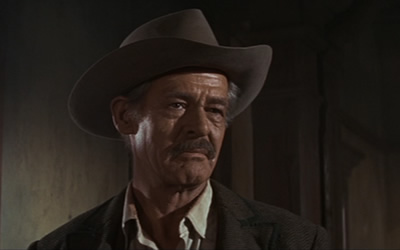 What follows is a bloody exchange, in which Pike and gang finagle their way out of town to the tune of “Shall We Gather at the River,” which frankly struck me as oddly funny for a sequence full of bodies being shot and killed.

This sets up the major conflict: Pike vs. Thornton. And naturally the two represent the conflict between the dying tradition of the old West gunslinger and the civilized society encroaching inevitably on the former frontier.

Without going into too much detail, Pike and his boys make tracks for Mexico. They make a deal with a Mexican general to steal weapons from the U.S. Army, to be provided to the Mexicans and their German military advisor in exchange for a shitload of gold. It doesn’t help matters much that Angel sees his ex-lover in the general’s arms and blows her away.

So now we’ve got Thornton and his gang of stupid thugs on one side, the Mexicans on the other, and Pike and cohorts stuck in the middle. A tricky situation to say the least.

I don’t want to reveal spoilers, but I will say that Holden’s world-weary expression and his close friendship with Engstrom really drives home that their way of life is coming to an end. But that they bonded in a way that many marriages fail to. 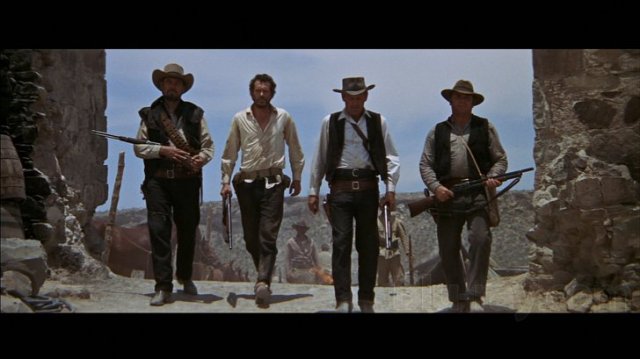 And when things go sideways during the climactic battle at the end, it provides an ending of great catharsis, in which Pike and his men avenge the wrongdoings done to them while going out with a bang. The way Borgnine cries Pike’s name out is sad and brave and … moving in its impotency and show of affection. And call it a guilty pleasure, but I’ve always loved the way Pike blows the hell out of that woman who tries to kill him.

There’s something thrilling about the fight for a hopeless cause that tempers all the arguably misogynist tendencies of the plot. But let’s face it – these guys were tough and the ladies they courted weren’t exactly delicate flowers.

Add in the awesome slo-mo action during the fight scenes, and it all adds up to one outstanding flick.

I ended up loving this film to the point where I could watch it repeatedly. So I judge it well-worthy of two thumbs up!

This entry was posted in Uncategorized and tagged movies, Movies Reviews, Westerns. Bookmark the permalink.