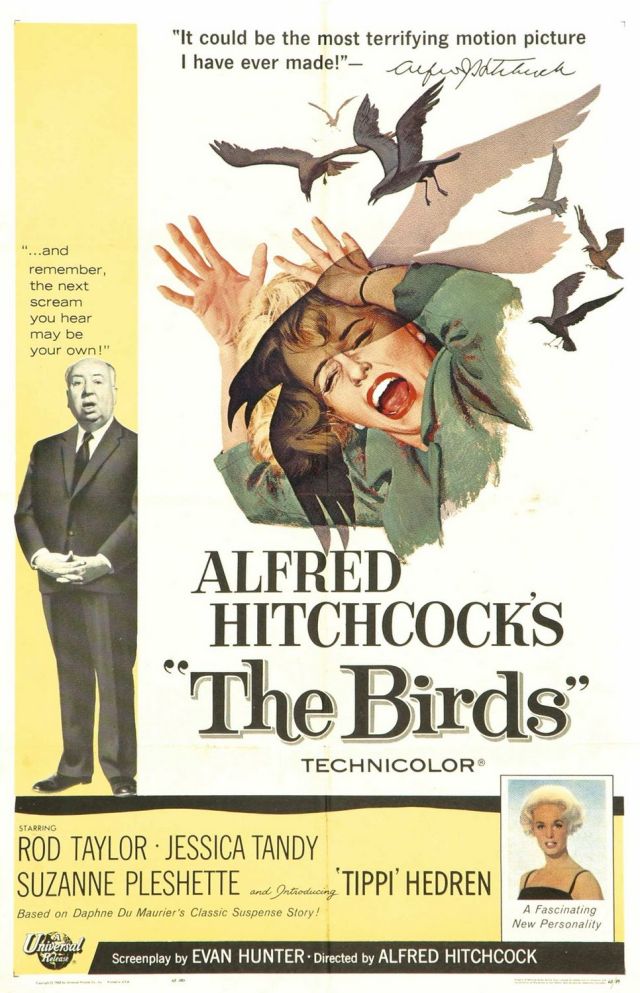 This is the first Alfred Hitchcock movie I ever saw and, believe me, it left an impression. Even though I saw it on TV back in the day when they cut out the really gory parts with graphic depictions of empty eye sockets … okay, you get the idea.

The story really intrigued me, even as a child. Melanie Daniels (played by Tippi Hedren) is this worldly, playgirl type who meets lawyer Mitch Brenner (Rod Taylor) in (of all places) a bird store. In usual movie-style fashion, Mitch plays a prank on Melanie, who initially reacts with anger, but then seeks to even the score by pranking him.

But that wasn’t the intriguing part for me. What interested me was that Melanie brought two caged lovebirds to Bodega Bay (Mitch’s weekend residence) and was later attacked by a seagull.

Mitch witnesses this weird event and invites Melanie home for dinner. After which all hell breaks loose as birds start attacking all the town’s people.

Starting with (but not limited to) the people most closely associated with Melanie.

And I kept thinking, “Is this all because she brought two caged birds into town?” I mean, first a gull attacks her, then one slams into the door of a house where she’s spending the night, then Cathy’s birthday party is attacked en masse, then the birds invade the friggin’ house. And then that poor farmer next door … and Suzanne Pleshette! They both end up having their eyes pecked out! I mean, it hardly seemed fair to me, as a child. Or even as an adult.

I don’t know. Maybe it’s a subtext. Maybe it’s Hitchcock’s version of a PETA message about birds. Maybe blonde chicks throw off the eco-system. But I’ve always thought there was supposed to be more to Melanie than met the eye.

In any case, The Birds stands out as one of the most memorable horror films I’ve ever seen. It’s a movie that’s stood the test of time and continues to creep out audiences to this day.

It also provided fantastic fodder for Mel Brooks’ High Anxiety, but that’s a review for another day. 🙂

I give this classic Hitchcock flick two thumbs up!