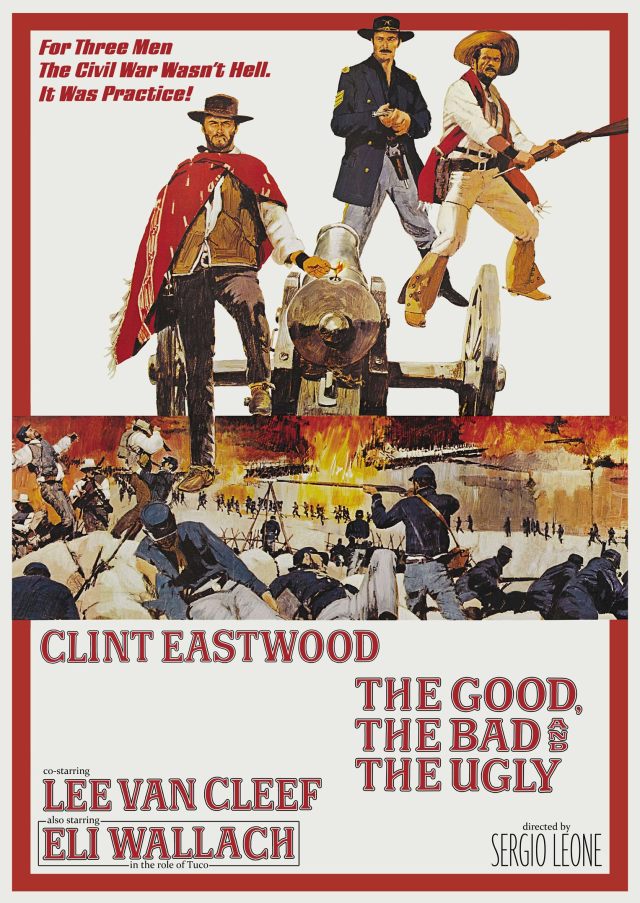 The third movie in the Dollars Trilogy may not have “Dollars” in the title, but money (or, more specifically, a cache of gold) is what the titular trio of the film seek.

Eli Wallach plays Tuco, a Mexican bandit with an impressive string of offenses and a bounty on his head. Tuco is also the “Ugly”, for some reason. I don’t think he’s ugly. Crude, funny, and violent, but not ugly. (Okay, so it’s a metaphor.)

Lee Van Cleef is introduced in one of the film’s most memorable sequences. It is he who first discovers the hidden Confederate gold. Did I mention this takes place during the Civil War? One of the things I like about this movie is its acknowledgment of the Civil War’s Western campaigns. Hey … I like history. What can I say?

It becomes obvious pretty quickly why Van Cleef (as the contract killer Angel Eyes) is the “Bad”.

Clint Eastwood (who plays the Man With No Name, except he’s called Blondie, so he has a nickname, okay?) initially captures Tuco and turns him in for the bounty. He’s apparently not a bounty killer in this film. He’d much rather bring Tuco in alive, so he can, let us say, reuse him to collect even more bounty. And this guy is the “Good”? Okay. Relatively speaking, I guess so.

After all manner of complications and plot developments, the three meet up in a Union prison camp. Where Angel Eyes is in charge of the Torture Department. Tuco, who has learned (approximately) where the gold is, reveals that information rather than having his eyes gouged out by a fat, disgusting Mexican guard.

That leaves Blondie, who has the final clue as to how to recover the gold. A secret Angel Eyes doesn’t seek through torture, because (according to the script) he knows that Blondie knows that telling Angel Eyes the secret won’t save him from death. Apparently, Angel Eyes has decided that squishing Blondie’s eyeballs out isn’t an option. A part I never quite believed.

Okay, so the film moves on. I won’t go into all the details, but there are at least two awesome shoot-out scenes in it. One is when Blondie and Tuco team up to take out Angel Eyes’ gang of thugs. The other is, of course, the Big Three-Way Confrontation between the Title Trio. The latter is made magnificent by the spine-tingling music of Ennio Morricone.

Be advised, this video may contain a minor spoiler or two.

I’ll confess, I’m a sucker for this film. But, whatever you do, watch the version edited for North American release.

I applaud director Sergio Leone’s efforts to breath new life into the Western film genre with not only this movie’s underlying critique of war and capitalistic greed, but its breathtaking long shots and use of extreme close-ups. Plus some of the most stylish gunfighting and other violence you’ll see on-screen outside a Sam Peckinpah film.

But those extra scenes that got chopped out for the North American release? They should have stayed chopped out.

Despite its length (with or without edits), I give this film the benefit of the doubt and think it’s worth 4-1/2 stars.