WARNING: This review does contain SPOILERS! But they don’t ruin the movie experience, I don’t think. 🙂

This has to be one of the bleakest films noir I’ve ever seen. Based on a novel with the same name, the movie lives up to the title.

Carnival barker Stan Carlisle (played by Tyrone Power, who is totally cast against type) looks to score big by learning the secret code that “Mademoiselle Zeena” (played by a young Joan Blondell) and her boozehound hubby, Pete (played by Ian Keith) use in their “mind reading” act. (Yes, the quotes are intentional, i.e., it’s a racket.) Carlisle tries to woo Zeena into teaching him the code, but she remains true to Pete. The secret code is worth a lot of moolah, and Zeena hopes not only to retire, but get Pete into rehab. One reason for Zeena’s devotion to Pete stems from the guilt she feels about playing a part in his becoming an alcoholic.

Unfortunately, Pete takes a drink from the wrong bottle, which Carlisle gives him by accident. Pete promptly dies. Guess who feels guilty now. The upside to this is that Carlisle becomes Zeena’s new partner. So he learns the secret code and passes it on to another good-looking carnival worker named Molly (played by Coleen Gray).

Carlisle and Molly grow closer and eventually leave the carnival circuit to perform in night clubs and other hoity-toity places. Carlisle now performs under the name “The Great Stanton”.

But that guilt over Pete continues to gnaw at Carlisle. And he makes his first Big Mistake by confiding in the World’s Most Horrible Psychologist, Lilith Ritter (played by Helen Walker).

It is the combination of Carlisle’s ambition and the recordings of Lilith’s counseling sessions with Carlisle that lead to the man’s undoing.

This takes us to an ending potentially so depressing, I was on pins and needles to learn the outcome. And I was expecting the very worst. However, despite every indication that Carlisle must ultimately endure a nightmare existence, the story actually ends on a hopeful note.

It is a somewhat tacked-on conclusion that differs from the book, in which Carlisle is doomed to a life as a carnival geek and boozer. Which brings me to a thought that occurred as I was writing this review. What if Carlisle gave Pete the wrong bottle “accidentally on purpose”? Did it happen due to a secret desire to kill him? And was his guilt justified? I can see how this movie could lead to in-depth discussions involving Freudian analysis, self-defeating behaviors, and various forms of capitalism from motivational speakers to CEOs.

The producers made a gutsy decision to finance this movie. Particularly with Tyrone Power in the lead role. Power was well-known as a romantic lead who played heroes, not con artists.

Among the pains taken to recreate the carnival world with brutal accuracy, the producers built a full working carnival on the 20th Century Fox back lot, complete with sideshows and real working carnies. 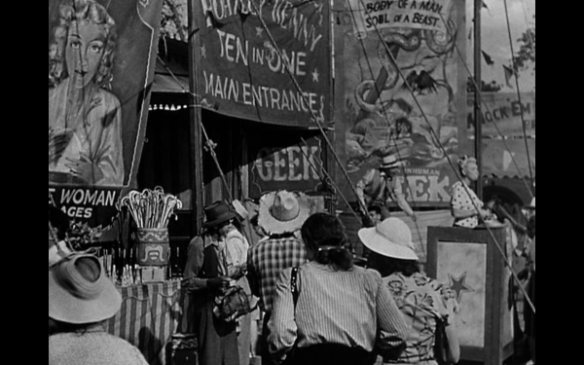 Via Flickers in Time

Unfortunately, the content was a bit too real for audiences in 1947 to deal with. I can imagine the shock of seeing Power in such a role, as well. That couldn’t have helped.

Initially a financial failure, the movie has since found acclaim. It’s a film that lingers in the mind well after the final fadeout.

You can watch the film on YouTube right here! 🙂