It’s an Honor to be Nominated — Twice! 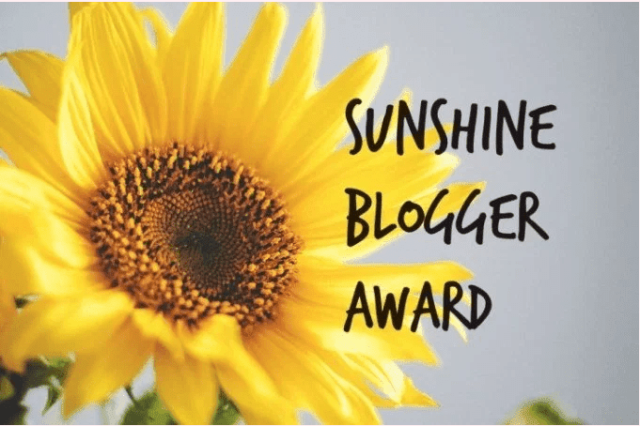 Imagine my surprise when I saw that I was nominated for this award. Again! I thought I must have dreamed the whole thing. I’m truly astounded to be singled out of every movie-themed blog in the rapidly-expanding universe of blogging for this fine honor.

And I still think that’s the most awesome flower!

So … I’ll start off by thanking ever so much the most awesome Tony Nash blogging as Movie Fan Man for nominating me/this blog here.

And to those who are honored to be chosen by myself for this remarkable award, here are the rules:

Embellish your blog with cool sunshine flower logo above.

Give a bunch of thanks to the blogger who nominated you.

Answer the 11 questions you have been asked.

Thank you again so much, Tony Nash. (Is that your real name? Because it would make a great character name in a novel or screenplay. Maybe a detective? Tony Nash, P.I. Sounds right! 🙂 )

1. Who or what inspired you to take up your passion in life?

Throughout my life, I’ve read a lot of books and seen a lot movies and thought, “I could write that.”

2. What is your favorite language other than English and Spanish?

3. Which of [the] 6 lost Wonders of the Ancient World do [you] wish was still in existence?

4. The Blu Ray release of Abel Gance’s Napoleon was one of the Holy Grail’s [sic] of Cinema. What film that you’ve seen that has had little exposure on home media would you like to see restored to its original glory?

Tough choice. Either a little-known TV movie called River of Gold starring Dack Rambo and Suzanne Pleshette or UHF with “Weird Al” Yankovic. Either choice would be kind of ironic.

5. Which European country would you most love to visit?

Whichever one has the fewest coronavirus cases. (Hopefully, France or Wales. Or Portugal.)

6. If you could rediscover one of the famous Lost Civilizations and/or Cities, which one would it be and why?

The Maya, I think. Because: chocolate.

7. Name 5 actors and/or actresses (living or dead) that you would love to meet in person.

8. Which pantheon of gods do you prefer: the Greek/Roman ones, The Nordic Ones, or the Celtic ones?

This is a bit like voting for president. I’m not wild about any of my choices. Can I vote for a godless universe? (Greek/Roman. If you insist.)

9. What short story or book would [you] love to see made into a film or which deserves a better film adaptation?

As to the first option, any of mine. Or Catcher in the Rye.

10. Which film genre that you normally don’t watch would you be willing to try if a friend recommended a film from said genre?

There’s really not much I won’t watch. Except maybe really horribly violent films or really “arty” films. I suppose I’d watch a Merchant-Ivory film if someone whose taste I trust really, really liked it. A lot.

11. Give a shout out on your blog to someone you really admire.

Thank you, Jane Fonda and Lily Tomlin! I adore you in Grace and Frankie (and everything else you’ve done).

Now, here are the nominees! (I may repeat a few previous choices, because, hey, I’m doing this twice. So why not?)

And now for those of you who feel up to it, here are my 11 questions:

1. What are your five favorite movies? (Good luck with that one!)

2. Do you think there’s a proper way to blog? If so, what is it? (That’s not just rhetorical. I really want to know.)

3. Why did you start blogging?

4. What are your five favorite books at this moment? (Because, that’s impossible to answer for always. Right? Sorry/not sorry about that. 🙂 )

6. If you could meet any historical figure, who would you pick?

7. If you could change into an animal, what would you pick?

9. If you ran into your younger self, what (if anything) would you say to him/her/yourself?

I think that does it! Yay, made it through! 🙂

And, finally, a song! One to suit the occasion! 🙂

2 Responses to It’s an Honor to be Nominated — Twice!