This week we wrap up the two-part series review of the B-movie The Land Unknown.

And, as time goes by, their clothing slowly disintegrates due to the unforgiving damp and hot climate, which results in our Plucky Reporter’s arms being fully exposed. I believe her outfit shrank to a size that would fit the average figure skater. 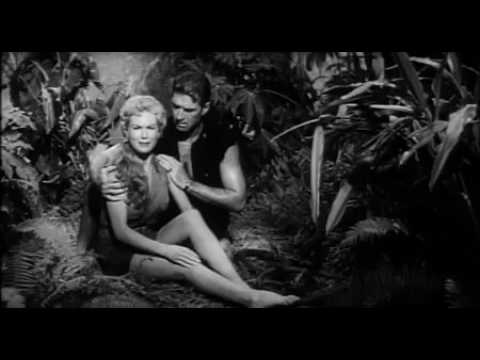 “Dammit! My clothes are shrinking.”

One of the best parts of this movie are its unforgettable special effects. Close-ups of lizards made to look huge through the magic of cinematography and perspective, for instance. And so many dinosaurs. I half-expected to hear the theme from The Flintstones play in the background.

Meanwhile, as they wait for the situation to resolve, the men (other than Commander Roberts) discuss the possibility of giving Brenda Starr Reporter to Hunter in exchange for the part that’ll let them get the hell out of there. Or maybe torturing Hunter until he gives up the precious spare component. But Commander Roberts puts the kibosh on that notion.

Anyhoo, after a few more dinosaur attacks and a few trips by Maggie Girl Reporter to see Hunter (I assume she does this to persuade him to help them, rather than spend the rest of her life in a somewhat Floridian Antarctic volcano crater). Eventually, Hunter relents and gives up the spare part. Or someone takes it. Forgive me, but I kinda lost track of the exact plot progression. The movie is really just one long, dinosaur-filled episode of Gilligans Island. With fewer babes. And more lizards.

So, with our heroes ready to make tracks, they still take the time to rescue Hunter. Which I thought was mighty decent of them considering he had tried to completely screw them over and force the Babe to stick with him.

And they all fly away. Back to the Known World. Where Commander Cody and Plucky Girl Reporter will no doubt tie the knot.