Time for another wacky review of a B-movie I happened to catch on Svengoolie!

In yet another sequel to The Mummy, we start off watching George Zucco make a long, slow climb up the 39 steps and then some of the Temple of Arkam. Only he turns into John Carradine by the time he meets with the aged, um, George Zucco! They should have called this movie Fun and Games with Old Film Footage.

Via and you call yourself a scientist?

This time around, it’s George Zucco who gets to tell (in his somewhat palsied manner) the Tale of Kharis and his undying obsession with Princess Ananka. You remember her, right? 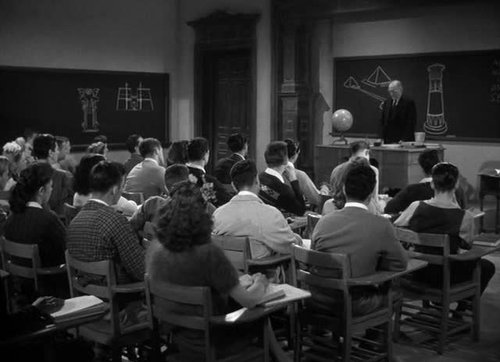 Via The Rellim Zone.

Amid that mumbo-jumbo, the movie abruptly cuts to (of all places) Mapleton, Massachusetts. In fact, we get to hear a lecture from Professor Matthew Norman, who has the distinction of being a respected Egyptologist with two first names. The professor engages in a bit of his own storytelling, expanding further on the Legend of the Mummy and the Princess. Hey, that has a ring to it. Perhaps as the name of yet another movie or TV show? One that takes place in Egypt or Mapleton.

While we’re in Mapleton, we meet young, handsome student Tom Hervey, who has a major case of the hots for a beautiful woman named Amina Mansori. She is, of course, of Egyptian descent. But, boy, does she hate talking about Egypt. Not a good sign.

Then we go back to Egypt, where Zucco informs Carradine of his mission to get Kharis (aka, the Mummy) and Princess Ananka’s body and bring them back home, so to speak. In a long, incomprehensible monologue, Carradine promises to do what must be done. Then Zucco treats Carradine to a free course on how to make tana leaf tea, the elixir that not only will attract the Mummy with its smell or something, but is basically like coffee for the walking dead.

It’s while Professor Norman pieces together clues from heiroglyphics about how to make tana leaf tea that the Mummy appears, drawn by the enticing beverage’s … existence. (I’m assuming Kharis arrived in this speck on the map in a previous sequel, based on a short montage of newspaper articles mentioning that a Mummy “may be back in town”.) Anyway, where were we? 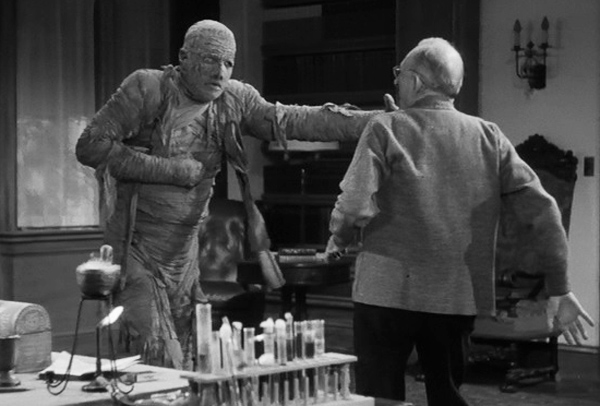 The Mummy stumbles into Professor Norman’s house (through a convenient open door) and proceeds to strangle him with his one amazing strong, good hand. Meanwhile, Amina of Egypt chooses this moment to go sleepwalking. Upon encountering Kharis, Amina is jolted from her reverie and faints near the crime scene.

And of course, Part Two will be up next week! 🙂